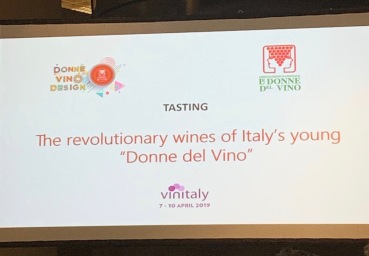 This year’s annual tasting sponsored by Le Donne del Vino (the national association of Women of Wine) featured young women winemakers, all under 40. Led by Vinitaly International Academy’s Ian D’Agata, an expert on Italian native grape varieties, this was an opportunity to taste some exceptional vintages made from some famous – and some not-so-famous – grapes!

We started off with a pink (what else?) and slightly bubbly Malvasia Rosa wine from Mossi 1558. Only three producers in the whole wide world make a wine from this grape variety, so we were feeling rather lucky to have been able to try it. This winery also makes a wine with Ortrugo, another more rare grape variety. Kudos to them! 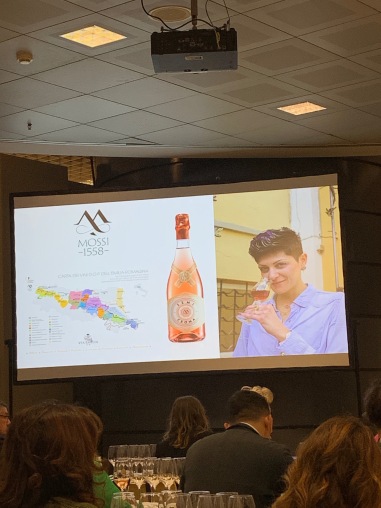 The name Maculan is better known to many for their sweet dessert wines. But today we tasted a brand new wine made from the Vespaiolo grape that goes into the famous Torcolato di Breganze (a lovely, sweet dessert wine) but is instead a dry white. Slightly aromatic, with a surprisingly bitter finish, this is a lovely expression of that grape, which in any case, is partially dried before making this wine.

The third producer, Serena Darini, presented an old familiar grape (Verdicchio) from a new company, Cantina Colognola Tenuta Musone. This is an organic wine, and a lovely expression of that grape. The winery’s strategy is to make mono-varietal wines from local grapes, so it’s Verdicchio and Montepulciano all the way! This wine is called Incauto and was named for her frisky horse, depicted on the label itself!

The fourth producer, Maria Paola Sorrentino from the Campania region, featured a wine made from the little-known Caprettone grape that grows on the slopes of Vesuvius. Benita ’31 is a wine dedicated to this young producer’s grandmother. Until 2014, this native grape was not even recognized! But lucky for us, we can now drink it. On the nose, delightful citrus and exotic fruit, on the palate, lots of nice fruit, good acidity and fresh.

Giovanna Caruso of the Caruso & Minini winery presented another organic wine (are you noticing a trend here?) made from the Sicilian variety, Perricone. The fruity, floral nose and lovely deep ruby color was a prelude to the roundness with a hint of spice on the palate. 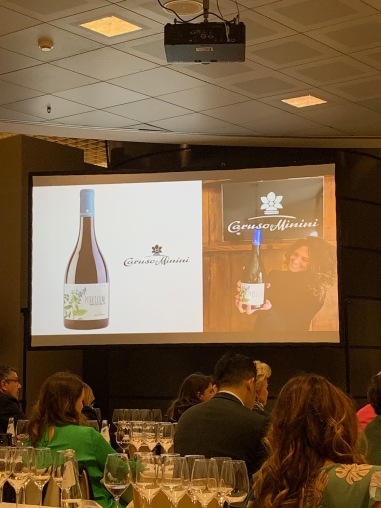 The sixth wine we tasted ranks in the top 100 wines featured at Opera Wine, the Wine Spectator-sponsored kick-off event at Vinitaly. Elena Fucci’s Titolo, which gets its name from the contrada, is an Aglianico del Vulture from the tiny region of Basilicata. This is a big name from a small region. Hats off to Elena Fucci!

Moving around the peninsula, and taking in both the islands of Sicily and Sardinia, this tasting gave us a chance to sample the best of Italy. The seventh wine hails from the island of Sardinia, and is an expression of Cannonau, perhaps the heaviest hitting red from the island. Called ‘Nau’ (pronounced ‘now’), this wine stood out for its complex nose, light ruby red color, and full body. Elisabetta Pala of the Mora&Memo winery explained that this Cannonau remarkably only does steel. Calling her wines by their nicknames (the Vermentino is called ‘Tino’, and no, I am not making this up!), is a young person’s touch, I think. And oddly enough, this Sardinian winemaker does not use the cork (that comes from Sardinia), but opts for a more ecological glass closure.

To wind things up, Elisabetta Donati presented her Moscato Rosa, a dessert wine from Trentino Alto Adige, which is where the Marco Donati winery is located. While the winery was founded in 1863,  this wine is new. Don’t think it is pink just because ‘rosa’ is in its name — that is a reference to the flower. As the sixth generation of this winemaking family from the Mezzacorona area, Elisabetta is the first woman to be involved in the family business. This wine represents a project and a message; in fact, it is only the women staff members who harvest the grapes for this vintage.

And here, just let me go on the record to say: this younger generation of women winemakers expressed themselves in nearly perfect English, at times seeming more at home in that idiom than in their native Italian (effect of the fairgrounds, and dealing with an international audience…) Girl power in winemaking, and promoting the best of what Italy has to offer.

Yours truly signing off from Verona…

Happy to celebrate Dante Day, the 700th anniversary of the Poet’s death, with a fabulous bottle of Verba Dantis, Cantine Lvnae’s homage to the author of the Divine Comedy.
Negroamaro and Moonshine... What do they have in common? 🍷🌛Read my latest blog post (link in bio) to find out. 😉 And if you know, 🎵🎶🎹 kudos to you for your knowledge of Italian culture! 🇮🇹 Evviva!
Happy Valentine’s Day 💝
Loved the @varvaglione1921 Christmas Edition this year: a bottle you could personalize with a message or dedication! 🍷 They even supplied the chalk for the blackboard label 🤣 (that’s what’s in the red sack!) But what’s even better: if you didn’t finish those bottles in the holiday season, just adapt for any occasion 😂🥂 Versatile! Cin-cin! 🎂
When a wine is dedicated to a friend, a woman, made for her, in her image, it’s a special vintage. Love this Chardonnay: complex, full-bodied, elegant, classy. Just like Maria Teresa! 💃🌹🍷That’s her, with yours truly! Cin-cin! 🥂
Cuisine? Any culture. Wine? Italian 🍷🇮🇹