The national association of Le Donne del Vino – the Women of Wine – today presented a special tasting on the occasion of the 30th anniversary of the association’s founding: wines made from very old vines. That means even 80-year-old vines, and sometimes even older! You knew that some wines improve with age, but did you know that the vines improve with age too? I know, I hear you, you got the hint: good wines age well; old vines make good wines; women, like very good wines, and like the vines themselves, also improve with age!

The line up was impressive: we started with Annalisa Zorzettig explaining her Malvasia Myò.

We followed this with a Gragnano from Campania and the Salvatore Martusciello winery, with Gilda Martusciello Guida presenting. I know, you think Gragnano is a name for pasta. Well, it’s also a name for a deep purple red wine that is served chilled, not unlike its northern cousin, Lambrusco. The eight grape varieties that go into this wine include the famed Piedirosso.

The third wine was a Teroldego Rotaliano Sangue di Drago 2015, Marco Donati winery. For a wine with a name like ‘Dragon’s Blood’, it was actually quite pleasant. From the northern region of Trentino Alto Adige, this rather young Grand Cru of Italy’s South Tyrol comes from a vineyard where the plants have an average age of over 75 years old. 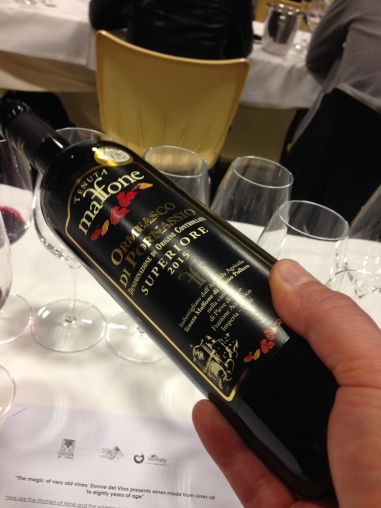 The regional variety was great, too. The fourth wine was from Liguria, an Ormeasco di Pornassio, another Grand Cru, which is nothing more than a Dolcetto varietal adapted to Ligurian soil. Rich in tannins, this wine came from a vineyard planted in 1927 by the great-grandfather of Eliana Maffone, Tenuta Maffone, who presented it today.

The fifth wine was a Cerasuolo di Vittoria, Sicily’s only DOCG wine, from Valle dell’Acate presented by producer Gaetana Jacono.

This classic blend of Frappato grapes with the more famous Nero d’Avola variety produce what Gaetana calls a ‘food-friendly wine’ with velvet tannins. She ought to know, she’s the sixth generation of her family producing wines on that estate.

Another Sicilian wine followed, the Etna Rosso DOC 2014 from Tenuta Bastonaca, a lovely Nerello Mascalese (80%) and Nerello Cappuccio (20%) blend. Grown at 750 meters above sea level, the minerality was evident, as were the tannins.

A surprising Campi Flegrei DOC made from the Campania grape variety Piedirosso was presented next. The vines here are at least 85 years old! This single vineyard, single variety wine comes from a unique vineyard where some plants are over 100 years old. Amazingly fruity on the nose, mouthwatering and tannic on the palate, this wine, called La Sibilla (Vigna Madre) was presented by Restituita Somma. 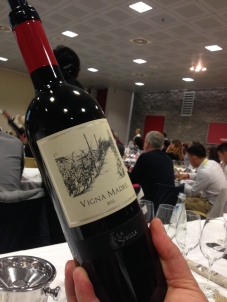 The last of the reds presented was a Barolo from Serralunga d’Alba, Piedmont. A stunningly beautiful color, on the nose there were clear hints of strawberry, cherry, plum, on the palate… simply, divinely, Barolo. Elena Bonelli of the Ettore Germano winery presented Lazzarito Riserva 2011, where the old vines – planted in 1931! – clearly give power and complexity, even if they do produce less quantity. And that, my friends, is why so many old vines are replaced, and why the wines we sampled today are so rare and to be appreciated: this is not a commercial mentality, this is passion for the fruit, passion for the vines. 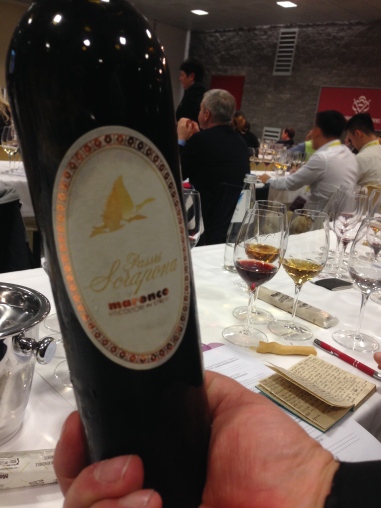 Ending on a sweeter note, we were treated to Donnafugata’s renowned Ben Ryé Passito di Pantelleria DOC 2015 from Sicily, and another Piedmont sweet wine, DOC Moscato Passito 2013 from the Marenco winery.

Once again, Le Donne del Vino offered a superlative, informative tasting with great variety and significance for lovers of the grape. In this case, for lovers of the grapevine. And the loving attention given these plants, often the age of our grandparents, tells a story within a story, and reminds us to respect our elders!

One thought on “The Magic of Very Old Vines”