Each year at Vinitaly, there are three important tastings sponsored by two famous food&wine journalists, Paolo Massobrio and Marco Gatti, of Il Golosario fame. The tastings are called Young to Young because they feature three young winemakers each day who present one of their wines to bloggers. I have had the privilege to participate over the past three years, even though I’d be reluctant to flash my ID upon entering. But hey! We’re talking about wine, and we all know that great wine gets better as it ages…  And so do some food&wine journalists!

The nice thing is: this is not a competition. The wines are not judged. It’s an information-sharing session, to get the good word out that there are young people making wine, carrying on traditions, but also innovating.

This Pinot Nero Pas Dosé is also organic, another growing trend in Italian wine. Pale to the point of transparency, the aromas ran from pastry shell to anice. Lovely acidity and good perlage, at 16 euros a bottle this is a buy! Giacomo, 35 years old, makes only 20,000 bottles; try to have one end up on your table!

The second young producer, Viola, only 24 years old and an enologist, explained that half of her 18,000 bottles of Brunello di Montalcino now remain in Italy. Previously, they exported about 90% of their wine. ‘Small is beautiful’ is the theme of my posts this week, and what is happening in Brunello-land confirms that. You don’t have to buy Biondi-Santi to drink Brunello: there are many small, interesting producers out there – some of them quite young – making wines worth waiting for. This Brunello was young, but you could tell it was going to grow older quite gracefully. Worth waiting for! 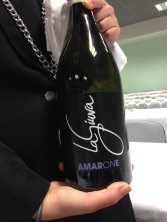 Valentina, 34 years old, studied art history and came to wine later. If you grow up in the area of Verona and dream of making wine, you probably dream of making Amarone. This bottle was her father’s idea, and while it is not a family tradition per se, it is a family endeavor. Here too we are talking small production: 25,000 bottles. They make some Bardolino, some Recioto, no Ripasso. This Amarone was chewy and enjoyable, and spends some noticeable time in new American oak barriques. At 50 to 60 euros a bottle, this too might be a ‘young to old’ wine. You know what I mean: something the younger generations make for the older crowd who can afford it, or something you buy now and let age in your cellar.

Interesting to me in this year’s edition was the lack of storytelling; the young producers seemed competent, prepared, commercially cognizant and aware of what they were doing. Perhaps what was lacking was some of that make-me-dream poetry that I heard (and liked) in the stories of winemakers who participated in previous years of this event. A new trend in winemaking?