For those of you who don’t know it, the University of Gastronomical Sciences in Pollenzo was the world’s first university entirely dedicated to the science of Food & Wine, promoting a new, ecologically sustainable, quality-based standard that also focuses on what is right and just for producers. Founded on an idea from guru Carlo Petrini, the founder of Slow Food, the university is not just a school, study center and laboratory for the study of alimentary practices, it is also a repository. Put it this way, their version of a library is a wine bank. 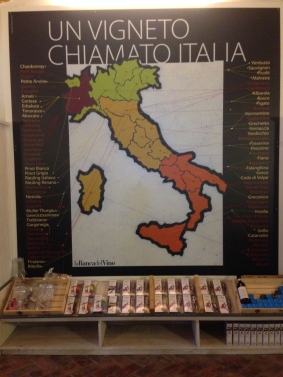 A vineyard called Italy, this poster shows the regions and some of the names of varietals that can be found there. So so so much to learn when it comes to Italian wine!

Wine education is an up-and-coming field, something both pleasurable and enriching. The University has begun a Masters program in Italian Wine Culture, but they are not alone: there are many associations and schools promoting the culture of Italian wine and trying to offer students of varying levels the chance to explore the great variety of grapes that Italy produces… 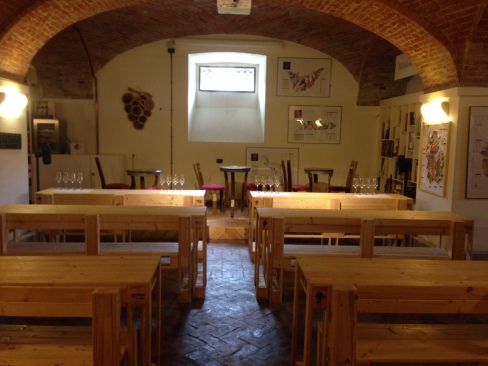 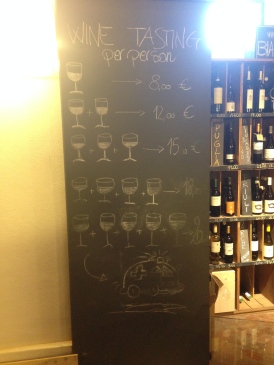 The Banca del Vino has a lovely tasting area, where guided tastings and lessons can be held. They make it fun, as their blackboard explanation of fees shows. Tasting five superb wines for 20 euros sounds like a deal to me! What is so compelling is the availability of all those regions together, with wonderful explanations.

OK, so there is a bit of a predominance of Piedmont, but it’s what you’d expect in this area, right? The Langhe, Piedmont’s answer to the hills of the Chianti region, produce some spectacular products, like Barolo, Barbaresco, Barbera d’Asti, and the (relatively) newly coined Nizza, all DOCG. Barolo, Barbaresco and Nebbiolo, as you know, are made from the elusive Nebbiolo grape. Why elusive you ask, when it is clearly so abundant and manifests itself in such fabulous vintages? Because take Nebbiolo away from this region and… You have nothing at all! Lombardy, you say. Yes, fine, some Nebbiolo grows in Lombardy, but that’s about it! Unlike Merlot or Cabernet Sauvignon or other big reds, this grape likes where it lives, and it isn’t going to give you satisfaction anywhere else.

Part of the display is to show the terroir – literally – in little glass jars accompanying the bottles of wine that find their origin in that soil. Nice touch.

A little corking campaign: Keep the Taste, Keep the Biodiversity, Keep the Charm. It’s true, corks are charming, and getting them out of the bottle has its own little ritual – subject of another blog post! – that would be a shame to sacrifice to screw tops!

If you get a chance to visit this shrine to wine, you’ll get to know better Italy’s cultural heritage. And the view ain’t half bad either!

Ce n’est pas un Martini! It’s not even a martini on the rocks! 😜😳 How about a Campari spritz? @campariofficial
Nothing like a spritz aperitivo to brighten up the day!
Pouring event for a sommelier is always a great opportunity to bring wines and people together! 🍷 Especially when the wines are all produced by women! @donnedelvino @donnevinopuglia @ddvliguria @donnedelvinoveneto @donnedelvinolombardia
What a pleasure to present @varvaglione1921 ‘s flagship wine, Papale Oro, a Primitivo di Manduria, to the ladies of Les Dames d’Escoffier in Boston. Fabulous evening, loved meeting them and thanks to @mariposawines for organizing. 🍷🍷🍷🇮🇹
Paradiso…. In the Golfo del Paradiso! After a splendid day at Portofino with a swim at Paraggi 😎🐬 dinner at Daö Vittorio in Recco! What more could a girl possibly want?
Summer in Puglia…. And Nature rejoices! 🍷🇮🇹😍