It is too hot to talk about wine. So let’s turn our thoughts to something cool… Gelato! 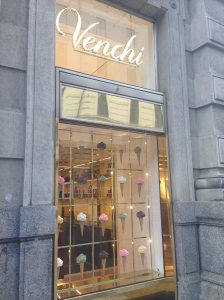 When I am in Milan’s Central train station, I often stop to have a Venchi gelato. Venchi is better known for its chocolates; take a look!

Chocolate is one of those things (like wine) that is really good for you, but that some people think is bad for you. Why is that? Personally, I like to conclude the day with one of Venchi’s cuor di cacao – 75%. Talk about anti-oxidants!

People don’t immediately think of Italy as the Land of Chocolate, but oh, my my my, it is!  From the famous Ferrero, to Venchi, and who could forget Perugina? Not to mention Lindt, which while Swiss, was run by the Bulgheroni family and acquired Caffarel in 1997!

In this, the hottest summer on record in over 50 years, a nice cool gelato – preferably of the extra-fondente type – is exactly the lunch treat I need! Buon appetito!

One thought on “Italy, Land of Chocolate!”