…for Tuesday is Martedì grasso, better known in its French version of Mardi Gras! That is to say, it is Carnevale, ogni scherzo vale! which goes a tad further than ‘Trick or treat!’ I dare say! 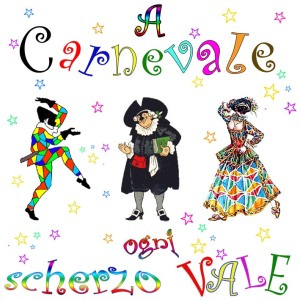 The tricks, or scherzi, I’ve seen come closer to charivari than the ritual throwing of rotten eggs at a jack-o-lantern.

Whether it’s a spray of shaving cream on your favorite sable coat, or a shower of coriandole – that in English are called confetti – that will leave you finding little squares of multicolored paper in your underwear for weeks to come, the Italians take the trick-playing part seriously. A club – something hollow, resembling a whiffle ball bat, thank heavens as light as that too – is often used by young children to hit their elders, even total strangers walking by on the street.

So if you’re in Italy this week, watch out!

Carnevale (Carne, vale! in Latin, or addio, carne!, good-bye, meat!) is the period that precedes Lent, a much more austere moment. So what are people eating and drinking to live it up? Lots of fried desserts, for one thing.

OK, so can you identify the zeppole, the struffoli, the chiacchiere, and the frittelle? (answers below!) Don’t forget, when offered some chiacchiere, be sure to huff and puff and blow all the powdered sugar onto the clothes of your host. (Yes, that’s a hint!)

In Venice, the mask tradition is a little too Eyes Wide Shut for my taste. The 18th Century costumes are stunning, however. People spend a small fortune going all out to rent their mask and costume and go to a ball. 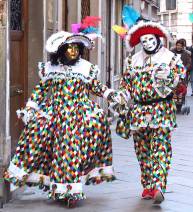 Viareggio, another hot spot for Carnevale, takes things more in that Tuscan let’s-make-fun-of-everyone-and-everything spirit, and has a big parade with parodied papier-mâché figures of politicians and cultural figures.

Ten points for those of you who know this famous Italian (and yes, answers are below!)