On a recent jaunt to Acqui Terme, in lower Piedmont, a man drove up in an old jalopy of a car and showed us this:

My friends had never seen such a treasure trove before — truffles, fresh from the earth! I complimented him on his catch, but rightfully, he attributed the great find to this:

And so I learned about the Lagotto Romagnolo breed of dog, specialized in sniffing out that delectable delicacy! I paid my compliments to the dog, whose origins are in the Romagna region of Italy.

Even Mantegna portrayed this breed in his 1474 Camera degli Sposi frescoes! Just take a look:

Five points if you spot man’s best friend, that symbol of loyalty, trustworthiness — all those qualities one wants to find (also) in a mate!

Wish this computer had a ‘scratch and sniff’ feature! The lucky owner took the thing to Hong Kong where Chef Bombana prepared it at his 8 e 1/2 Otto e mezzo Bombana Hong Kong restaurant.  I can whiff the aroma from here! 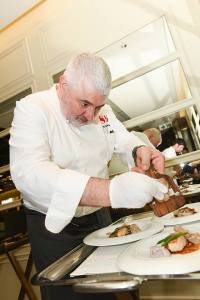